A Guide to the Mobile Plan and Internet Providers in France

Our English-speaking advisors will help you compare, subscribe and save on your Mobile Phone or Internet Plan at carine.prost@selectra.info. You can contact us also:

You're moving to France and want to set up your mobile phone and get connected to Internet. But what are your options, and which supplier should you choose? To ease your decision, we here present the major actors on the Internet and phone markets in France. 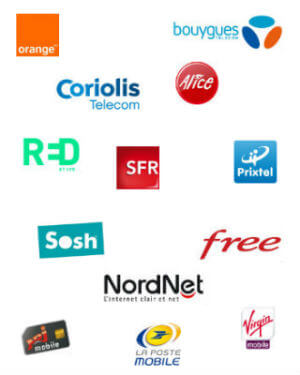 How the Internet and Mobile Phone Markets Work in France

The 4 main phone and Internet providers in France are Orange, SFR, Bouygues Telecom, and Free Mobile. They all offer not only internet and mobile phone plans, but also additional services such as television and fixed phone lines (collectively known as a "box" offer).

They all have their own phone and internet infrastructures, and coverage is fairly similar. They also all operate low-cost brands or offshoots, which include Sosh (Orange), and RED by SFR.

(Pronounciation: "aw-rahnj") Formerly France Telecom, Orange is the historic provider for phone and Internet in France and is currently still the largest telecommunications operator in the country. The company also has the most advanced 3G/4G network coverage. In addition to approximately 600 boutiques across France (closed as of 2019), Orange has an English-speaking customer service line, available at +33(0)9 69 36 39 00.

Orange offers internet, fixed and mobile phone plans, as well as its Orange television service. In some parts of France (zones non-dégroupées), Orange still owns the fixed phone line infrastructure, and customers within these zones must rent a line from Orange for their phone/internet.

(pronunciation: "ess-eff-air") SFR (Société française du radiotéléphone) was created in 1987, and counts more than 12 million mobile phone customers, and around 6 million broadband customers (as of January 2017). The company was bought by the telecommunications operator Numericable in 2014, but operates under the brand SFR.

SFR offers internet, fixed and mobile phone line plans, as well as television and video games. The company was the first to offer 4G coverage in France, and currently has one of the most well-developed 4G networks in the country. SFR operates a low-cost offshoot called RED by SFR, which also offers internet and mobile phone plans, fixed phone lines, all contract-free (sans engagement). More about how to contact SFR in this article.

(Pronunciation: "free") Free is the most recent major mobile provider in France, established in 2009 by the telecommunications company Iliad, and is growing rapidly.

You can save money on your mobile phone plan by subscribing to a package offer (phone plan + Internet). Call our English-speaking customer service line at 09 77 55 72 27 (Monday to Friday, from 8 am to 9 pm and 9:30 am to 6:30 pm on Saturdays and on Sundays 9 am to 5 pm), or ask for a free callback to help you find a plan that meets your needs.

(Pronunciation: "corh-rhi-oh-lees") Coriolis is a Mobile Virtual Network Operator (MVNO) founded in 1999. The company operates on Orange, SFR et Bouygues Telecom's networks. Coriolis offers mobile phone plans (with and without contracts, including plans that include phones) as well as Internet plans.

The Coriolis customer service is online-based, and customer advantages for recommending the company. Coriolis also offers special deals targeted to seniors and the hard of hearing.

(Pronunciation: "hredd by ess-eff-air") RED by SFR is SFR's low-cost offshoot, created in 2011. RED by SFR offers contract-free (sans engagement) internet and postpaid mobile phone plans, as well as the option for packages including fixed phone lines and/or television.

RED by SFR also offers advantages for customer referrals (one month free - valued at €19.99/month) and has a partnership with Citadium (10% off on purchases when you present your RED by SFR bill or the RED&Moi application). RED by SFR also sells mobile phones.

Eligibility for these plans depends on the location, and many plans include a fixed phone line. NordNet also offers internet security plans.

(Pronunciation: "lay-bah-rah maw-beel") Lebara Mobile is a Mobile Virtual Network Operator (MVNO) that relies on the Bouygues Telecom network to function. It was founded in order to help immigrants stay in touch with their family all over the world, making it what is called an "ethnic operator". In addition to offering 5 types of mobile phone plans and a prepaid SIM card. Customer service is available online, by phone or by mail.

(Pronunciation: "lah puh-st maw-beel") La Poste Mobile is a Mobile Virtual Network Operator (MVNO) that relies on SFR for its network coverage. Formerly known as Debitel (also Simpleo, & Simplicime), the company was created in 1991 but is currently shared between SFR and La Poste. In addition to offering mobile phone plans (pre and postpaid, contract-free), La Poste Mobile also proposes a package offer (Internet + fixed phone + television). Customer service is available online, by phone, by mail or in any one of the post offices throughout France.

(Pronunciation: "energy mo-beel") NRJ Mobile, created in 2005, is a Mobile Virtual Network Operator (MVNO) that relies on Orange, Bouygues Telecom et Numericable-SFR's networks. NRJ Mobile offers prepaid and postpaid mobile phone plans, including contract-free plans (sans engagement), and discounts on the purchase of phones (with contract plans). NRJ Mobile also offers a plan that includes a mini 4G router that can be connected up to 10 devices at the same time.

It may be worth noting that, in 2018, some providers and offers may no longer be available to subscribe to. This is the case of Alice and its Alicebox owned by the provider Free. Since June 2018, it is no longer possible to subscribe to a new Alice contract (although customers who joined before that are not affected and can keep their Alice contract). As for Virgin Mobile France, which was owned by SFR, it has been replaced by RED by SFR since 2016.