Internet in France: Find and Sign Up for the Best Plan

Our English-speaking advisors will help you compare, subscribe and save on your Mobile Phone or Internet Plan at carine.p[email protected]. You can contact us also:

So you've just arrived (or are moving to) France. How can you get Internet access? This guide explains your options for connecting to the Internet in France, and outlines how to get Internet service in France.

Internet in France: What Are Your Options?

Like most countries throughout Europe, Internet usage in France is high. Many shops/cafes/fast-food chains offer free wifi, though you'll find fewer options in smaller towns. Tourist offices throughout many cities in France sometimes offer free wifi access, as do most hotels/B&Bs/hostels. Internet cafes are quite common as well.

Your best option for getting connected to Internet depends on whether you are visiting France or staying in the country for an extended period of time. If you are coming to France to study or work, you may find you have Internet access at your office or school library, but it's likely that you'll also need Internet access at home. Here are our suggestions for getting Internet access in France depending on your situation:

Moving to a Home in France and Starting Internet Service

If you have a home in France and are responsible for utilities, you will likely want to set up the Internet (along with other utilities such as electricity or natural gas). You have a varied choice of Internet providers throughout most of France, with four main actors dominating the market (Orange, SFR, Bouygues Telecom, and Free). Some of these providers also operate low-cost brands as well. 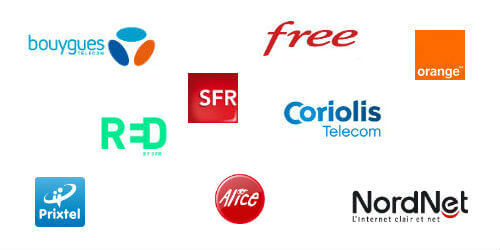 There are two options for the type of Internet access for your home:

Pricing of Internet plans are fairly similar for both technologies, but the optical fibre is considerably faster than ADSL. Internet access at home will be unlimited with both these options. In addition to offering Internet service, all providers also offer bundle packages that can include additional services such as fixed-line telephone, television, or mobile phone plans.

Broadband is still not an option in some rural parts of France. If your home is in a zone blanche (an area not covered by a telecommunications provider), you will want to look into satellite technology for your telephone and Internet access.

If you are staying in France for a short time period (i.e. less than three months), you can probably get by without buying an Internet plan for your stay. Depending on where you are in France, some of the following options for Internet may be available to you: 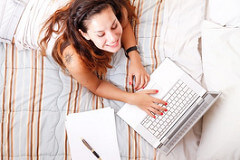 How to Sign Up for an Internet Plan in France

Depending on what type of zone your home is located in, you may or may not have a choice of Internet provider. However, the information required for signing up for an Internet plan in France is the same, regardless of the provider:

Internet offers in France are quite competitive, so it's well worth taking a bit of time to compare suppliers and plans. Asking yourself some of the following questions will help you find the internet plan that best meets your needs.

How the Internet Market Works in France

One thing to note about Internet access in France is that your options depend on what type of "zone" you are in. The historic telecommunications provider in France is Orange (formerly France Télécom), which still owns and operates a considerable amount of the phone and Internet infrastructure throughout France. In some areas though, access to the Internet is slower and generally more expensive (see below).

Throughout most of France, the Internet infrastructure has been separated from the fixed telephone infrastructure, allowing multiple companies to operate in the same area (zones dégroupées). Internet is of much higher speed and generally cheaper in these areas.

However, most areas in France are zones dégroupées, meaning that the phone and Internet infrastructure has been "unbundled" and customers are free to choose any Internet service provider. High-speed ADSL and optical fibre technologies are available in zones dégroupées.

There is also a third possibility, dégroupage partiel (partial unbundling), in which consumers must sign up for a phone line with Orange but are then free to choose a different Internet service provider. Internet access is generally more expensive than in zones dégroupées, but speed is faster than in the zones non-dégroupées.

Find out how fast your connection is by taking our free and instant Internet speed test.

Cancelling an internet contract in France

If you need to terminate your broadband plan with a French operator, you will have to send your request 10 days before you want your contract to come to an end. If you are moving to another city or country, or if you have a "sans engagement" contrat, then it will be free.

If you want to switch to a new provider, there might be cancellation fees, but some providers offer to pay for them.