How to Set Up a Mobile Phone Plan in France

Our English-speaking advisors will help you compare, subscribe and save on your Mobile Phone or Internet Plan at [email protected]. You can contact us also:

Moving to France? Already here? Find out everything you need to know about getting a mobile phone set up in France.

How the Mobile Phone Market Works in France 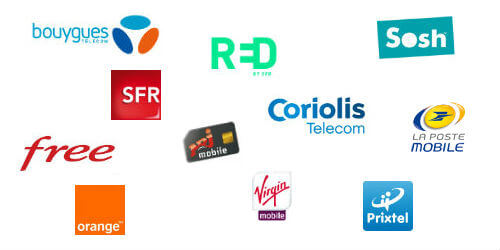 While Orange (formerly France Telecom) was the historic owner of the phone and internet infrastructure in France, all of the major mobile phone providers offer roughly the same quality of coverage (réseau/couverture) throughout most of the country. The only exception may be in the countryside, in which case it might be worth asking your neighbours which provider offers the best coverage in your area.

In terms of Internet data, most of France is covered by a 3G Internet connection, and bigger cities have 4G coverage available. As it is still developing, coverage for 4G does vary slightly by the provider, with Free Mobile slightly behind the other main mobile providers for 4G coverage.

Bring Your Own Phone or Buy One in France?

Depending on where you are coming from, you may need to unlock (débloquer) your foreign phone to be able to use it in France with a French SIM card (carte SIM). Mobile devices in France operate on a GSM network, so if your phone is not GSM-compatible, it may not work in France.

Unlocking Your Phone for France

If you have not yet arrived in France, it is a good idea to go to your current provider and ask them to unlock it for France. You may also be able to have your phone unlocked online, or at a specialised mobile phone shop. Depending on where you are coming from, unlocking your phone in France may cost anywhere from 20 to 100 Euros.

Where to Buy a Phone in France

You have a few options for buying a phone in France. Depending on the plan, you may be able to purchase a phone through your mobile phone service provider, either online or at one of their retail boutiques. You can also buy a phone in a large retail chain (such as Carrefour or Auchan), or a retailer that specialises in electronics (FNAC, Darty, Boulanger...). La Poste Mobile also sells mobile phones.

Some online retailers offer second-hand phones (téléphone d'occasion), which is a good option to pay less for a mobile phone in France. For greater security (and to avoid the risk of purchasing a stolen phone) we recommend buying a second-hand phone through a professional retailer, rather than on an online marketplace (such as leboncoin.fr).

Prepaid or a Plan?

Prepaid, or "pay as you go", phone plans (prépayé, formule à rechargement) are sometimes a good option when you first move to France and need to set up a phone number quickly. To start phone service with a prepaid phone, all you need is the phone, a SIM card, and to purchase some phone credit (carte prépayé, recharge). All of the main mobile providers (except for Free Mobile) offer pay as you go options, as do some of the smaller operators such as La Poste Mobile. Recharging credit is usually quite easy; most newsagents and tobacconists sell prepaid credit, as do many supermarkets.

While pay as-you-go phones can be a useful way of getting a phone number quickly, rates are often somewhat confusing to read and difficult to compare. Finding the answers to the following questions will help you get a better idea of which prepaid phone offer is best for you:

Need Data? Postpaid plans offer much more generous data allowances than prepaid phones. How much data do you need?

If you are staying in France for an extended period of time (three months or more) we recommend choosing a postpaid mobile phone plan, as rates are considerably lower and plans often come with advantages such as free calling abroad and more generous data allowances.

Mobile Plans With or Without a Contract

Postpaid mobile phone plans are generally a better deal than prepaid phones, particularly for people with smartphones who want to be able to use data. Many postpaid phone plans offer features like unlimited texts in France (SMS & MMS), free calls to certain countries abroad, access to wifi hotspots. Some providers even offer you "country passes" when you travel, which allow you to makes calls within the country you are visiting and to France at no additional charge. Postpaid plans can come with a contract (forfaits avec engagement), locking you in for 12 to 24 months, or without a minimum duration (forfait sans engagement).

Mobile Phone Plans Without a Contract

All of the low-cost operators (Sosh, RED by SFR, B&You, La Poste Mobile, etc), as well as Free Mobile offer postpaid plans without a contract (forfait sans engagement). With these plans, you usually need to already have a phone that you can use in France (suppliers offer only SIM cards, not phones), and mobile subscriptions and customer service are online-based. Most providers offer two types of plans: a basic plan with limited calling time/texts/data, and a complete plan that includes unlimited phone calls, unlimited text messages, international calls and Internet.

Mobile Phone Plans With a Contract

While the contractless postpaid plans offer low rates and flexibility, plans with a contract can sometimes be a better option, depending on the situation. Signing up for a phone plan with a one or two-year commitment may be a cost-effective way of purchasing a new phone, for example. Phone plans with a contract generally come with additional advantages that are not available for contractless plans, such as subscriptions to video on demand or music channels like Spotify.

You can sign up for a phone plan with a provider in one of their retail boutiques, online, or over the phone. You will need to have the following information with you when signing up for a mobile phone plan in France:

How to Cancel a Mobile Phone Plan in France

Depending on your provider and the type of plan you have chosen, you may be able to cancel your plan online or over the phone. The simplest way to cancel your plan, however, is to send a letter by registered post (lettre recommandé par avis de reception). You can find out more about cancelling a mobile phone in France, including a free letter template, in our guides: