With EDF? Compare energy tariffs and save!

Selectra's English-speaking advisors will help you compare, subscribe and save on your electricity and gas plans.

With EDF? Compare energy tariffs and save!

Selectra's English-speaking advisors will help you compare, subscribe and save on your electricity and gas plans.

EDF is the historical supplier of electricity in France. It markets the regulated electricity tariff (the "blue tariff") and offers various electricity and natural gas offers.

EDF (Electricité de France) is the historical and largest electricity supplier in France. Created in 1946, it was the only supplier for electricity for most of France for over five decades. However, with the deregulation of French energy markets, EDF now operates in competition with numerous alternate suppliers. Find out everything you need to know about EDF in our guide to contact and sign up for an EDF account, as well as how to find English-speaking customer service.

The majority of French households purchase electricity from EDF at the regulated tariff (the Tarif Bleu), though it is not the cheapest offer on the market.

The Tarif Bleu is fixed by French public authorities (the Commission de Régulation de l'Energie - CRE - along with the ministers for economy and energy), and usually changes about once a year. Most of the time the Tarif Bleu increases when it is changed.

There are in fact three different regulated tariff options available as part of the Tarif Bleu:

With the Option Base, the price you pay for electricity stays the same throughout the year, regardless of the time of day or season. This option is best for small power consumers and those with few electrical appliances. While this option is simple, it is not the cheapest available on the market.

With the Option Creuse (which might also be descibed as the tarif jour/nuit, or heures pleines-heures creuses), the price for electricity changes depending on the time of day. With this option you are charged two prices for electricity: a more expensive "on-peak" rate (charged during times of high usage), or a cheaper "off-peak" rate (charged when overall power needs are less - usually at night). The hours for on- and off-peak rates are set by the grid operator (not by the customer), and are location-specific (in French).

The Option Creuse is a good choice for high electricity consumers with a relatively flexible schedule (i.e. it might be good for you if you are able to wait until certain times before doing your laundry, cooking etc.).

Calculation based on regulated tariffs as of February 2021

If you are interested in EDF's Option Creuse you should also know that alternate suppliers also offer peak/off-peak options, which are often cheaper:

The Option Tempo is a rather complicated time-of-use rate, in which the price of electricity changes depending on the time of day as well as the day itself (and how high general electricity usage is that day).

In other words, with Option Tempo you pay an on-peak and off-peak rate for electricity, but these rates are particularly high on some days of the year (typically 22 days, spread out between the 1st of November until the 30th of March), slightly higher on others (43 days throughout the year), and lower throughout the rest of the year (300 days out of the year - including all Sundays). You can find out what kind of day it is on here (in French). This kind of rate is only worthwhile for high electricity consumers with a relatively flexible schedule.

The Option Tempo is a regulated tariff option, and no alternate suppliers offer anything similar. However, unless you a larger power consumer and are able to dramatically reduce your consumption on red days, a simple fixed rate or heures creuses option from an alternate supplier that guarantees savings compared to the regulated rates is a more affordable option.

EDF (Electricité de France) was created in 1946, the product of the nationalisation of about 1500 local distribution utilities (known as ELDs).

This made EDF the main electricity generation, distribution and supply company in France, and it enjoyed a monopoly over much the country for over fifty years, until the French electricity market began to open to competition in the late 1990s as part of a wider European deregulation initiative. EDF was a state-owned corporation until 2004, when it became a limited-liability corporation under private law (in French, a Société Anonyme), though the French government still holds 84% ownership.

Did You Know?France's reliance on nuclear power is the main reason for why electricity is relatively cheap in France. Find out more about the cost of electricity in France in our guide.

While deregulation has forced EDF to lose some of its customer base, it has also brought new opportunities for expansion into other markets, such as natural gas. EDF now sells natural gas supply and has become a direct competitor to the historical natural gas supplier, Engie.

When you move to a new home in France, you will likely need to set up electricity service. You may choose to open an account with EDF, or you can contact an alternate supplier directly to start service.

You can open an account for electricity with EDF over the phone, online, or in an EDF boutique. While the EDF website does include some information in English, it may be complicated to open an account online if you are not comfortable reading French as the marjority of information there remains in French. We recommend calling the EDF English-speaking helpline (ideally outside peak times) to open an account with EDF.

Compare EDF with other suppliers (in French)

While the EDF customer reviews seem to be positive on the whole, in the event you need to contact EDF to make a complaint about service with EDF, you can write a letter to the following address:

You can also fill out a form online (in French). Find out more about making an energy complaint in our guide. 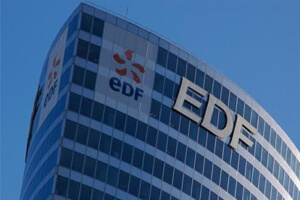 You can pay your bill online in your personal space on the EDF website, or over the phone by calling 09 70 83 33 33. This number is free when dialed from a French landline.