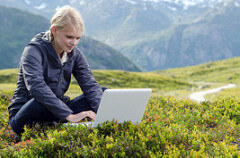 So your home in rural France is in a zone non-dégroupée (non-unbundled zone). How does this affect your options for Internet and mobile phones? Which suppliers have the best offers?

This guide explains how to get the best deal on the Internet in zones non dégroupées in France.

What is a zone non dégroupée?

In some parts of France, Orange (historically France Télécom) still has an exclusive right to the "local loops" (phone lines), and competing telecommunications providers have to rent access from Orange when they provide service to customers in these areas. This adds an additional cost that customers have to pay as part of their prix de forfait (the price of the plan) when they sign up with a supplier other than Orange. Other services, including high-speed Internet and Internet TV, are not available in these areas.

Note: prices and offers valid as of October 2019

SFR offers a few options for Internet in zones non-dégroupées, which vary in price:

Bouygues Telecom has one offer for customers in zones non-dégroupées:

Free has one offer in zones non-dégroupées:

If broadband speeds are particularly slow in your area, it may be worthwhile investing in satellite Internet. Depending on the plan chosen, Internet via satellite can reach speeds comparable to broadband in urban areas (up to 22Mb/s). However, satellite Internet does involve a considerable investment, and high-data volume plans can be expensive. Find out more about satellite Internet in our guide.

As it does not need to add on additional rental fees, Orange is your best option for an Internet + television + fixed telephone line, though prices amongst providers are quite similar.